Game will be St. Louis' second on Jan. 1 at Twins' Target Field;
hosted 2017 game at Busch Stadium against Blackhawks

Good times and good happenings keep occurring for the Blues, who were announced after the first period of Sunday's 4-1 win against the Minnesota Wild at Xcel Energy Center as the Wild's opponent next January in the 2021 Bridgestone NHL Winter Classic on Jan. 1 at Target Field, home of the Minnesota Twins. 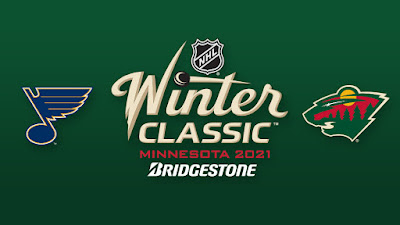 The Wild were announced earlier this month as the Winter Classic host, and with the Blues in town for a nationally televised game on NBCSN Sunday night made for the right scenario to announce them as the opponent, which had been speculated for weeks.

"We're going back? I had no idea," Pietrangelo said, who then was told "Well, you know now."

"Target Field," he was told.

It will be the second Winter Classic and outdoor game for the Blues, who were the hosts to the 2017 Winter Classic at Busch Stadium, when they beat the Chicago Blackhawks 4-1.

"It was pretty cool (in 2017), such a spectacle for us," Pietrangelo said. "Obviously I’m a big baseball fan, so being at Busch (Stadium) was pretty special. Anytime you have a chance to play in these games, it’s such a big event ... the league does such a good job of making it a big event. It’s fun for us, it’s something different. We all grew up on those outdoor rinks, so to make it a reality at this level is pretty special.

"I think the cool part for us (in 2017), you had the family day before, guys were bringing their kids out and wives, and dads and moms ... all the stuff, it all kind of leads into it. It’s probably one of the best memories I have so far playing in a game other than winning (the Stanley Cup) last year."

The Blues have done quite well for themselves in recent years, with hosting the Winter Classic, winning their first Stanley Cup last year, hosting the NHL All-Star Game in January at Enterprise Center to now getting the nod for a second outdoor game.

For Schenn, it will be his third. He played for the Philadelphia Flyers in 2012 at Citizens Bank Park, home of the Philadelphia Phillies, and in 2017, played with the Flyers against the Pittsburgh Penguins in the Stadium Series at Heinz Field.

"Yeah, I found out this morning. Obviously there’s rumblings and rumors," Schenn said. "I’ve had a chance to play in one Winter Classic and one outdoor game. Every time they’re fun for us and friends and family and you go outside and feel like a kid on the pond again and just embrace it."

Jake Allen was the goalie of record for the Blues in their win against the Blackhawks. For Binnington, this will be his first outdoor game.

"That’s really cool," Binnington said. "That’s a great experience from what I’ve heard, the guys experiencing it before. It’s a lot of fun and Minnesota is a great hockey city. I think it will be a lot of fun.

"No, never played outside, so that will be a new experience. We’ll see ... it’s a long ways away, but it’s a cool opportunity for the Blues."

There were multiple candidates for the opponent, namely the Winnipeg Jets, who geographically are the closest to Minnesota, and perhaps another rising Central Division foe, the Colorado Avalanche, who just recently hosted the Navy Federal Credit Union Stadium Series at the Air Force Academy's Falcon Stadium in Colorado Springs, Colo. But the Blues' recent success likely played a role in their invitation again, and it speaks volumes to how far the franchise has come.

"Yeah maybe. I think Busch Stadium is a staple in Major League Baseball," Pietrangelo said. "I think now what we accomplished last year, now maybe we’re on the national stage a bit more than we were before. So, we'll gladly take that.