Five-year agreement reached with western Massachussets franchise to serve
as home of prospects after San Antonio Rampage being sold, moved to Nevada

The club announced on Friday afternoon they've reached agreement on a five-year contract with the Springfield (Mass.) Thunderbirds. 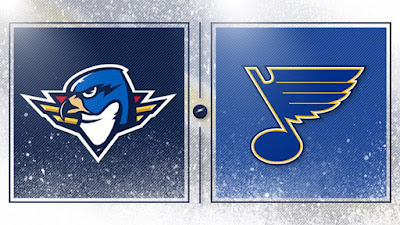 The Blues are currently affiliated with the San Antonio Rampage, but it was announced Feb. 6 that the Rampage were selling their franchise to the Vegas Golden Knights, who in turn announced they would relocate the franchise to Nevada and leave the Blues, who came into agreement with the Rampage, on a five-year agreement prior to the 2018-19 season.

At the time, it left the Blues scrambling to find a new home beginning with the 2020-21 season, but that has now been resolved.

"We are excited to announce our deal with Springfield and close our search for a new affiliate," Blues general manager Doug Armstrong said in a statement.  "Springfield is a strong franchise in a city with a rich hockey history. Our partnership will allow us to continue to develop our players and further strengthen our franchise as a whole."

"We are pleased to announce our affiliation agreement with the St. Louis Blues," Thunderbirds president Nathan Costa said in a statement. "Our two organizations share a commitment to community, fan engagement, and putting a first-rate product on the ice. With this partnership, we believe the future is bright for professional hockey in Springfield."

The Thunderbirds, in existence since the 2016-17 season, have been the affiliate of the Florida Panthers for four seasons, meaning they will be in search of a new partner moving forward.

Once the current season concludes, all Blues players and coaches under contract with them will relocate to reflect the move to Springfield.

The Thunderbirds play their home games at MassMutual Center, a multi-purpose arena and convention center located in downtown Springfield and are owned by and will continue to be owned by a broad-based group of local investors.

"As an ownership group, we felt it was extremely important to enter into a long-term partnership in order to ensure that the Thunderbirds remain an institution in Springfield for years to come," Thunderbirds managing owner Paul Picknelly said in a press release. "We are excited to report that our five-year agreement with the Blues will do exactly that."
Posted by lkorac10 at 1:59 PM